This past weekend, a special event took place raising awareness about Vaccine-Injuries sponsored by Michelle Ford (@vialnews) and her Vaccine Injury Awareness League in Atlanta.  From a rally on a rainy day in front of the CDC (Centers for Disease Control and Prevention) Headquarters in Atlanta, to a World Leader Health Education Summit on Saturday at Life University in Marietta which included a special screening of the movie “Vaxxed” along with special guest, and the film’s producer, Del Bigtree.

I forewarn the reader, this is not a pro-vaccine or anti-vaccine article, but simply an attempt to expose the truth, and I will leave it up to the reader to decide for themselves.

This event, is the second of its kind here in Atlanta as the first was held in October of 2015, in which I also was present.  On this particular Friday, the weather forecast was for rain, and they were correct in their prediction.  The rain, although never heavy rain began around 9:00 am and lasted throughout the day, but it did not seem to have any affect on the multitude of parents and supporters who attended.  The CDC has one main entrance off of Clifton Road, and all four corners on that intersection were flooded with people holding signs, chanting and sharing stories with their fellow rally-ers. 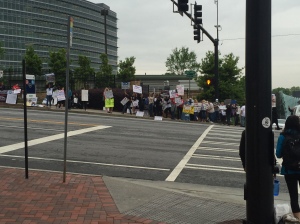 Present at this event was Minister Tony Muhammad (@BroTonyMuhhad) from the Nation Of Islam, who also was at last years event.  For myself, I had mixed feelings about the Nation Of Islam being at the event last year, and even mentioned it to Michelle Ford.  After all, they are supposed to be bad people right?  At least that’s what I’ve been told by the media etc over the years,and so I, like many people, took what the media told me and went with that. But then I heard him speak at the event last year, my opinion was totally changed.  The fact that the most important fact that they have been withholding from us is that black babies, especially boys, have a higher chance of getting Autism from the MMR vaccine, it makes sense that the Nation Of Islam would jump on board this train.  Mr. Muhammad is attempting to bring everyone together, white, black, red, yellow etc.  Its what ‘they’ don’t want…once we all come together, there’s no chance of losing.  The powers that be want us divided, and not united, but that’s entirely a different article.

Here is a little bit of what he had to say on Friday, “We have to push back, and any government official, be it a president, be it congress, be it senate or local official.  Any of them who have been bought out by pharma.  They are the magicians of the Bible, and they need to be dealt with.  And I’m telling you, God is angry.  God is angry and many of these people are going to be destroyed.  And Minister Farrakhan said these words to me, ‘Brother, go and join with the politicians.  He said the American people, when they wake up to the truth on what the pharmaceutical industries are doing, the American people, no matter what the color, will get so angry that they will go an tie up our government officials and drag them down the streets with trucks for the attacks that they’re doing on our babies.’  And I’m telling you, I see people of all colors waking up.  Unity. I see walls that had divided many of us.  Now these walls are being torn down by pharma, because now you’re attacking the babies.  I don’t care if it’s a black baby, a white baby, a brown baby, or a yellow baby, you don’t ever touch babies. ”

He goes on, “Any group that don’t protect it’s children, is a group that should never exist.”  A fellow participant then asks, “Who’s not standing up for children?”  “Well, the deceived.  Our people are deceived.  For their lack of knowledge.  And Jesus said these words, ‘You shall know the truth, and the truth shall set  you free.’ And these are the people who are gonna spread the truth.  Let me tell you, we are going to be victorious.  There’s no losing when you have truth on your side.  It may not look like it, but we will never lose.  And God never depends on numbers, so I don’t want nobody to think it’s gotta be a lie.  David slew Goliath with a stone.  He had 5, but he only had to use 1.”

The event on Saturday was an all day event full of speakers speaking the truth about vaccine research, which included Dr. Brian Hooker, Dr. Judy Mikovits, James “Jack” Lyons-Weiler, Dr. Nancy Banks, along with personal stories from parents, a brilliant speech from My. Muhammad, a special Q&A with Del Bigtree and special appearance from entertainer TI along with his son.

If you don’t know the story behind all of this, I will be brief.  In 2013, Dr. Brian Hooker received a phone call with a 404 area code (Atlanta number).  He chose not to answer the call because he had already received several harassing phone calls from the CDC for his consistent, and ongoing investigation of the CDC.  Low and behold, that call was from Dr. William S. Thompson of the CDC.  Dr. Thompson, over several weeks/months admitted to Dr. Hooker that he was involved in not being truthful about a research study he was a part of back in 2004.  Over 30 phone conversations he revealed a consistent pattern of scientific fraud specifically from the CDC’s Immunization Office. 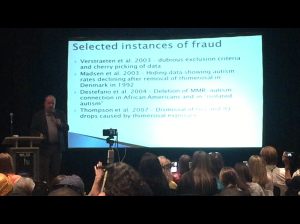 Dr. Hooker has been working since this time working to get Dr. Thompson subpoenaed by Congress to testify about this matter.  Dr. Thompson wants to testify.  He wants the truth to be known.  A separate article about what Dr. Hooker had to say will be in part 2 of this series.

The weekend ended with a special screening, (which was set up with the help of Mr. Huhammad) of “Vaxxed.”  We were treated to a special pre-viewing introduction from the film’s producer, Del Bigtree.

He said, “It was almost exactly one year ago that I flew myself down to Austin, Texas and sat in a basement with Andy Wakefield.  He told me he was working on a documentary about the CDC Whistleblower.  I met  him in Los Angeles for a private event and I said, ‘I wanna see what you have.’  When I sat in that basement and watched the movie that he was working on…umm.. I saw this. (pointing to the crowd).  I saw you.  I saw the news.  I saw the media.  And I saw our opportunity to change this.  The people always ask, ‘How did you, how did you make the decision to leave your job?’ Ah..it was the easiest decision I’ve ever made in my life (applause).  So many of you parents have been sharing your stories.  Warning those of us who have children to look out and you’ve been ignored.  You’ve been threatened.  You’re so alone, you;ve been going through such a difficult situation.  And compared to the lives that I’ve sat with many of you, and I’ve interviewed many of you, and I’ve watched what your lives is…making a move is easy compared to what you do everyday. And so…my hats off to you, and I’m honored that what you do everyday..is smile everyday…and at the end of the day you bring those beautiful children the love that they deserve.  And I wanna thank Brother Tony….for bringing the Nation Of Islam.  For bringing people together.

“I’m heartened by the fact, no matter what the media’s trying to say about this film, more and more audiences are seeing what this film is really about and they cannot stop us now.  Because the truth is out there.  Enjoy the film.”  A review of the film will be in part 3 of his series.

No matter which side of the vaccine argument that you are on, I encourage everyone to see this film.  For me personally, I don’t think I really saw/heard anything I hadn’t already been aware of etc, but it is still well worth seeing.

I also encourage anyone looking for more information to check out:

Michelle and her team is already planning for another event in October of this year.  Brother Tony and TI are also on board.  Expect a much larger event coming up this fall. 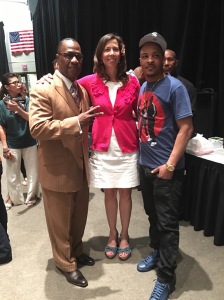