Yesterday the citizens of Austin, TX had the opportunity to vote on Proposition 1, which in effect was a rule requiring all Uber and Lyft drivers to submit to a fingerprint background check in order to operate and pick up riders.  Citizens of Austin voted 55.81 to 44.19 in favor of the requirements the city wanted to enact.

In an effort of full disclosure, I will say up front, that I am an Uber driver, so take that into account as you read this.

First, some background in case you are not aware of what Uber is.  Uber is a cellphone app that people who need a ride can connect with someone who is willing to use their personal car and drive them safely to where they need to go.  It has been around for several years and is very popular, especially with  the under 30 crowd, and it used worldwide.  Uber activated it’s service in Austin in June of 2014, but didn’t officially get permission from city officials until October of 2014.

I will attempt to speak to this is 4 or 5 different aspects to see if we can make some sense of this and what it means for the future of ride sharing companies; Government getting involved for the money, Drinking and Driving and the DUI rates, riders choice of what is safe,  the actual ballot confusion and voting on a Saturday, and benefits of Uber.

Government Involvement:  In my opinion, this is nothing more than government seeing a successful business model that is working and trying to figure out a way to get their greedy little fingers involved for financial benefit.  I would love to think that government would be happy with a service like Uber since it seems to be greatly reducing the number of people who are drinking and driving, but I’ll touch more on that later.  There have been come reports stating that the City of Austin would pay for the $40 fingerprint background check fee, but I have seen no official statement from any government official saying that.

Drinking, Driving and DUI Rates:  According to Austin Police Department’s own numbers Austin experienced 454 DWI collisions in 2014; that count was 24 percent less than the 597 DWI collisions in 2013.  Remember Uber started in October of 2014.  In my own experience, Uber is a great alternative if you even think you might be drinking when you go out.  The 30 and under crowd doesn’t even consider it in my opinion.  Even older adults have told me that they would rather take a Uber rather than risk driving home after even 1 drink.  How long have we been hearing about the seriousness of drunk driving?  As long as I can remember, and now that it seems we have a great solution, our government wants to put restrictions on it?  Makes no sense to me.  I cannot tell you how many times I have been thanked by passengers for offering my service to get them home safely after a night of drinking.  “You’re saving lives man, and I thank you for it”, one passenger told me recently.

Infowars.com reporter, and an Austin citizen Joe Biggs had this to say this morning on a Periscope rant.  “Well today Proposition 1 passed in Austin, TX which means that there is no more Lyft or Uber.  And the reason they passed this law, and they allowed it to happen and they brought it up, was because the DUI rates in Austin, TX was down tenfold.  No one was getting DUI’s.  And now it’s pissed off the city of Austin and the police department because they can’t make all that money off of DUI’s, and yet they run campaigns where they say they want to stop drinking and driving.  That’s all they’ve done, is they’ve created more drinking and driving.  More people will die because of this.  Because there is no longer readily available service like Lyft or Uber.  You can’t even find a cab anywhere.”  He goes on, “So now people are gonna resort to drinking and driving and going out and doing all this bullshit, and you’re going to have more crashes, more deaths and more wrecks and all this crap because our government is so goddamn corrupt.  They wanna make more money of your DUI impoundments.  stupid!”

Riders don’t just Uber when they are drinking, but it’s a big part of it. I have people everyday who use Uber for everywhere they have to go.  For some people, it’s actually cheaper for them compared to a car payment, car insurance, gas, and maintenance on a car.  It’s also a preferred choice for people either going to the airport or being picked up at the airport.  A typical ride from the airport to downtown Atlanta here will charge a person about $15, as compared to a minimum $40 ride for a taxi.

Riders Choice:  Ultimately it’s up to the rider to decide whether or not they feel Uber is safe enough to use.  It’s their choice.  No one is forcing them to download the App and utilize it.  At this point, the popularity of Uber is increasing daily.  I have been driving for Uber since late December, and in my time, I have definitely seen an increase in usage.  I have much less down time than I used to and stay busy all day long as often as I continue to drive.  Uber is just another option for people to use who don’t want, or don’t have the chance to use other mass transit options.  It could easily be said that Uber is much safer than taking MARTA (the Atlanta bus and train service).  Once a passenger requests a car, they are shown a picture of the driver, what kind of car they are driving, the vehicle license plate number,  and the driver rating (0-5 with 5 being the top rating)  At the end of the ride, they are also given the opportunity to rate their driver 1-5.  If they had any issues with the driver they can also make comments on them.  This is Uber’s attempt to weed out the bad drivers.  The point at which drivers get shut down vary by city, but it’s usually around the 4.7 mark.  Uber already does a background check on their drivers before they are allowed to drive which includes driving  history, criminal background check, verify insurance information and a terrorist watch list check.  To me, this is enough.  There has been stories that have hit mainstream news about Uber incidences which seems like a targeted attack to shed a negative overall feeling of Uber.  Uber picks up and drops off millions of passengers everyday without incident, but one thing happens and it’s all over the news.  Why is this?  Have they too been paid off by government, by the taxi lobby?  It’s well-known information that almost all of mainstream media in the U.S. is owned by 6 companies, all with the same agendas.

I have a friend that is a Uber driver in Austin (who is NOT happy) who went out and drove today, and this is what some of the passengers had to say:

“I never thought the result would be against prop 1 with 65,000 people who signed a petition that took this whole thing to a vote anyway.”

“Well DWI lawyers are going to be flocking to Austin and the city is about to make a ton on them!” 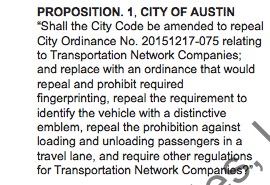 Do you understand what you are voting on with this language?  There was a ton of media and propaganda from both sides in an attempt to inform the citizens of how to vote.  Essentially, a yes vote was for Uber, and no vote was for the City of Austin.  Thee city of Austin came up with new rules in November of 2015, and with 65,000 signatures from citizens, Uber was able to get this to be determined by a vote of the citizens of Austin.  About 17% of Austin’s eligible voters cast their ballot.  My question here is, it’s not just one city that Uber services in each area.  The “Atlanta” area covers many cities around the metro area and not just Atlanta.  For example, I live about 40 miles from the city of Atlanta, but I can log in right where I live and get a ride within a few minutes.  I don’t have to drive in the city limits of Atlanta, but I choose to because it’s busier there, and I can potentially make more money there.  So with that being said, why was the vote just limited to citizens of Austin?  Why not the entire area that Uber covers around Austin?  Is it because just the City of Austin wants that additional income?

My next question is, why was the vote held on a Saturday?  Most voting usually occurs on Tuesdays, yes we have primary elections on Saturday’s, but that’s entire states voting.  With that in mind, early voting was an option here, so I am in no way saying a Saturday vote was entirely to blame here.  It just seems odd to me.  In a vibrant city like Austin, with many options of things to do, who wants to take their time out of a Saturday to go vote?  Especially in spring time when people are excited to get back outside for activities.

Benefits of Uber: This is what I hear from my passengers as the reasons they use Uber:

I don’t think this is the end of the war between Uber and the city of Austin.  It’s just the beginning.  Uber is taking a stand as the future of its service depends on it. Eventually the citizens of Austin will come to miss the service. Miss the ability to get a cheap, clean car ride home after a night of drinking.  We will see an increase of DWI arrests, accidents and deaths.