Posted on September 11, 2016 by LibertyWarrior

Hillary Clinton attended the 9/11 Memorial event today in New York, but had to leave early as she was rushed out and helped by several people to get into a van.

Several videos have finally surfaced showing how she clearly had to be aided to move the few feet from the sidewalk into the van.  The one video clearly shows her feet nor working on their own and appear to be dragging. 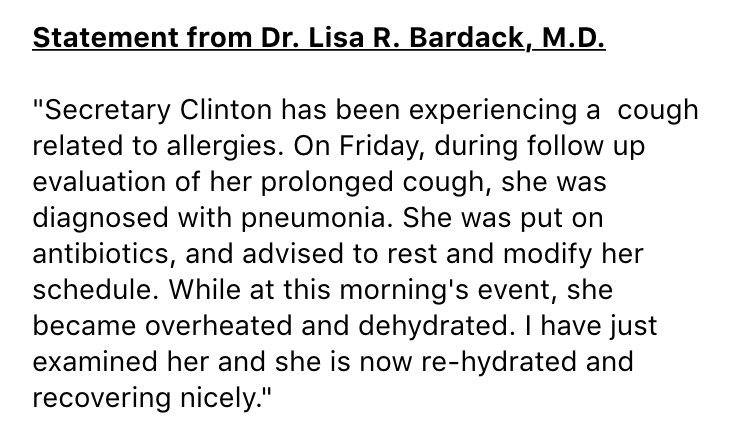 If she indeed has pneumonia, she should be resting and not going anywhere.  I’m no doctor, but I know that much.  And if she was diagnosed on Friday, why are they just releasing a statement today?  I’m not buying it.

The media has come with every type of explanation for this incident, recapped by this tweet from Mike Cernovich:

Timeline of media hoaxes:
– Sick Hillary didn't faint
– Oh it was hout out
– She had pneumonia

That's just in ONE day!#ClintonCollapse

So what happens if Hillary is found too ill to continue?  Here is the rules from the DNC Article 2:

So really what that says, in Section 1, part C is that they can replace Hillary with whoever they want?  Is Joe Biden next one in?  Tim Kaine?  Bernie Sanders?  I think the Bernie Sanders supporters would have a fit if it wasn’t him, don’t you agree?

Like Loading...
This entry was posted in Health, Politics and tagged fainting, hillary clinton, pneumonia. Bookmark the permalink.