Some things you may not know about the Flu Vaccine.

I just wanted to throw out some information about our current flu vaccines, and the harmful ingredients they include.

As you can clearly see in the following chart, direct from the Center For Disease Control and Prevention’s  (CDC) own website, the number of doses distributed each year as increased every year since 1980 except for just a few years.  (11 times to be exact). According to census.gov the US Population in 1980 was 226,542,199, and 12.4 million doses were distributed that year.  So that’s about 5.4% of the population.  By 2016, the estimated population was 322,762,018 and 146.4 million doses were distributed, 45.3% of the total population.  Over the last 36 years, we’ve gone from 5.4% to 45.3%, which is a huge increase.  That would be a huge return on investment.    Imagine if your income increased that much, or your stocks increase that much in price.  Of course this doesn’t mean that many people received the vaccine, but these drug companies aren’t stupid, they won’t produce and distribute that many, if they didn’t think they would just go to waste.

Does anyone think that the flu has become more common over the last 36 years?  I have never had the flu ever in my 49 years of life, and I’ve never gotten a flu shot….ever.

The huge drop you probably noticed in 2004-2005 was due to license suspension in October 2004 of Chiron Corporation by the United Kingdom’s Medicines and Healthcare Products Regulatory Agency.  At the time, Chiron was anticipated to supply almost half of the estimated 100 million doses required in the U.S. for the 2004–2005 influenza season.

I highly recommend anyone who intends on getting the flu shot to look at, and read the insert for the ingredients contained in that particular vaccine.  Or any vaccine for that matter, not just the flu vaccine.  The doctor, or medical professional administering the shot should comply with your request.  If not, leave immediately.  Here is a list of several harmful ingredients in the flu shot courtesy of Mike Adams and NaturalNews.com via mintconditiondaily.com/flushot 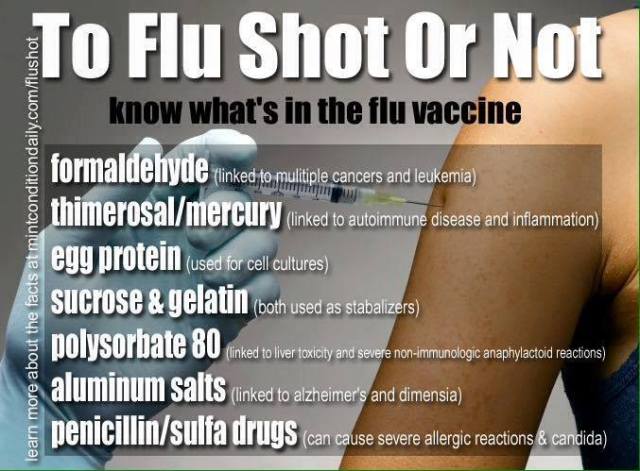 Vaccines, including the flu vaccine is big business to the pharmaceutical companies.  The top 5 players in the game are Pfizer, Sanofi Aventis, Novartis AG, Merck Company, and GlaxoSmithKline.  By 2018, the estimated revenue is expected to hit $41.85 billion.  From a CNBC on October 19, 2015, the flu vaccine created $1.61 billion in revenue, according to industry researcher IMS Health. Globally, manufacturer CSL estimates the market for influenza vaccines at $4 billion.

As far are your family doctor is concerned, how does he/she make?  Well, this is from Catherine J. Frompovich (A retired natural nutritionist with advanced degrees in Nutrition and Holistic Health Sciences) in 2013:

Guess how much the vaccine administration fee is? According to Dr. Lander, it should range from $14 to $30.

Dr. Lander uses a hypothetical patient base of 2,000 and explains who may or may not receive the flu vaccine. He contends bottom line and revenue results are $14,000 to $30,000 from only 1,000 patients receiving the flu shot. However, Dr. Lander throws in a financial wild card regarding 100 patients, who called to get a flu shot and then end up scheduling a well visit. According to Lander, a doctor “should be generating an additional $10,000. Bottom line: $25,000 to $42,500, which is not bad!”

I cannot stress this enough, but don’t ever get the flu shot.  It will make you sick, potentially give you cancer (which of course you won’t find out until later), lead to Alzheimer’s and/or demensia as well as several other things.  Don’t continue to feed big  pharma your hard earned dollars.

1 Response to Some things you may not know about the Flu Vaccine.