Despite rain, Vaccine Truth Rally Goes on at the CDC in Atlanta.

Even though the weather did not cooperate, several hundred people showed up today in front of the CDC Headquarters in search of truth and transparency.

Today I had the opportunity to attend an event outside of the CDC Headquarters in Atlanta, GA held by Michelle Ford from VIAL (Vaccine Injury Awareness League, Twitter: @VIALnews, Facebook.com/VIAL911).  The purpose was for a “Rally Demanding Truth, Transparency And Freedom.”  Dr. William S. Thompson, who currently works at the CDC, wants to be subpoenaed to testify in front of Congress regarding his whistle blower activity in which he came out and said himself and his group falsified documents in a study regarding the connection between vaccines and autism.  A part of of this rally was to promote this idea and help make this happen.

The weather forecast was not great, and it turned to be as such, but I was surprised as many people showed up that did.  I’m not great at estimating crowds, but I would say at least 200-300 throughout the time that I was there.  I did not take a lot of photos as it was raining, even though I have a waterproof case for my phone, but it just wasn’t convenient, so I don’t have any photos showing the crowd as it grew.  This one is from early on, around 8:30 am. 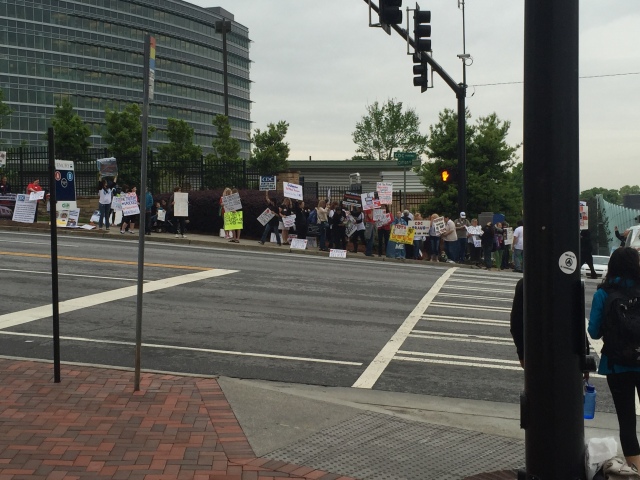 I had the opportunity to talk to several parents of vaccine injured children during my time there, and honestly, even though they were sad to hear, I was glad to hear them.  With each story, the more I heard, the more I learned.  Here are some of those stories.

I spoke to one particular mother who has a child injured by a vaccine that contained Thimerosal (a mercury containing preservative) back in the early 2000’s.  What I’d like to point out about her story was the legal side of it.  She was in the process of taking the Thimerosal manufacturer, Eli-Lilly and Company to court, but was stopped by what they call the, Lilly Rider.  After searching for a judge who didn’t own stock in Eli-Lilly, she finally found one who agreed to look at her case.  Things were proceeding along, about to start discovery, but in 2002, the House of Representatives passed the Homeland Security Bill that created the Homeland Security Department. Mitch Daniels, “Tucked away in that bill, in the middle of the night, was a secret rider that would have dismissed all lawsuits against vaccine makers for having put this substance called Thimerosal, a mercury-based preservative, in vaccines given to children, with the idea that that may be causing autism.” From that point on, her lawsuit was dead.  Congress threw this attachment along with this bill and essentially protecting Eli Lilly from prosecution.

I also spoke with another mom whose child had bad ear infections as a child and was scheduled for more vaccines are the 15 month appointment, but since the child was ill, it was decided they would delay until the 18 month appointment.  After the 18 month appointment, the child became very sick and at this point nothing seemed abnormal, until she was watching videos of the child from before the vaccinations.  She noticed that her child seemed more advanced before than currently, and that seemed odd.  Long story short, after talking to her doctor, and looking into other options, she decided to pursue treatment with Dr. Jeffrey Bradstreet who was “treating children with Autism Spectrum Disorder, PPD, and related neurological and developmental disorders.”  The kicker to the story was that her twin nephews, who are only 3 months younger than her daughter and received their vaccinations from the same Dr., at the same office 3 months after her, had no problems with the vaccines.  As it turns out, after getting the lot numbers for the vials, and verifying with the manufacturer, different vials were used in that 3 month period  Her daughter received her shot from the last vial which contained Thimerosal,and her nephews received theirs from a newer version which did not contain Thimerosal.

Despite the bad weather, it did not seem to have any affect on the people in attendance.  There wasn’t many moments without some sort of chant being heard.  Whether it was, “CDC, Tell the Truth”, “We’re not going away” along with others.  It was an energenic group which included, Minister Tony Muhammad and  Marcella Piper-Terry, who both will be speaking tomorrow at the World Leader Health Education Summit in Marietta, GA.